This game is a submission for Ludum Dare 49. View all gamesView submission

A downloadable game for Windows and macOS

'The Salatroitsk Incident' is a  short PSX-style horror game set in a fictional Russian city after a nuclear incident. You've been sent to collect rock samples for research purposes, however have been warned of rumours of a strange mutant abomination roaming the area. Collect 6 samples by following readings on your Giger counter and escape before the monstrous abomination fuses your body into its bubbling fleshy mass.

Use your Giger counter to track down and collect the 6 radiation samples. The CPM will be higher as you get closer to targets.

Keep your distance from the abomination, shooting it will cause it to temporarily retreat, however this will be less effective as you collect more samples.

Once all samples have been collected, find your way back to your vehicle to escape.

Build has issues when installed from the Itch.io website. Please install the Itch.io app and download the game through that instead.

Not scary or hard, but still fun!

Fantastic game, thanks for letting me try your game, I want you to help me by subscribing to my youtube channel, greetings from Spain ...

Reply
Casper The Helipilot3 days ago

Reply
Hula Noob5 days ago(+1)
Loved the setting and look/feel of it but alas, I could not finish it. I hope I didn’t miss out on a cinematic ending :D I am curious what you can do with more than 48 hours, so it's a follow!
Reply
bergson455 days ago(+1)

good horror game could add a little more stuff tho

The monster started to make me worry when he would run away for only a couple seconds at the end. Thing was ugly! Cool game!

Like the concept. Would love to see it expanded upon, but it definitely has potential.

Pretty cool concept. Needs a bit more things ,  there's not much going on other then a slightly annoying blob.

Thanks for playing, the game was made in 48 hours for the Ludum Dare game jam, so I didn't have much time to add too many features.

I quite enjoyed this! I love these PS1 style horror games. I also liked that it was nice and simple.

There is no documents or notes about the story or the history of rock samples but anyways good game.

Thanks for playing, the game was made in 48 hours for the Ludum Dare game jam, so I didn't really have much time to add much/any back story

No problem, I enjoy the game very much. Appreciate the feedback!

Reply
FahimHasmi9 days ago
The fact that you made this in 48 hours was impressive,keep up the good work
Reply
DanteA079 days ago
muy buen juego y con mecánicas entretenidas
Reply
Rostiger Rentner10 days ago

hi, big thx for the cool game. greetings from rosti 😍

That game was awesome keep it up...

Pretty good game, I'm also interested in the story behind the incident. This is the first game in my video.  Also, why my man Jabba in here?!?!?

Reply
Gynz11 days ago
Pretty good game, why was Jabba The Hutt in here tho?
Reply
5mg11 days ago(+1)

Comments below the clip;

Imagine this, you've only got 2 days to launch a game. A game with a beginning, a middle and an end…

Who the fvck would be able to do it?

The dude delivers this game in spades.

Try to fvcking focus on your fvcking Giger counter, while a mutated blob is out there to get you, and turn you into bubbly fvcking meat…?

What kind of sick mind plays this…?

What kind of sick mind comes up with this…?

Had so much fun playing this game.

You please give it a shot and see how cool you really are.

Kudos to all involved.

For a game made in 48 hours it was good, the monsters speed was pretty slow which allowed me to collect the rocks with no difficulty. The game felt way too easy and at best could have definitely introduced the possiblity of 2 monsters, one near the entrance the other near the end so that you would have to be more conserative of your ammo and how close the monsters are. They also appear too early in the fog and given that the player has aimbot on these monsters pretty much, it basically prevents them from getting too close.

Also instead of feeling right away after collecting more rock samples it should have been a case of taking more bullets. So once you have 5 out of 6 it would take around 3 bullets to make the monster go away. There could've been an ammo amount because this dude apparently just had infinite ammo, probably 30 is all that would have been necessary.

That's just my opinion on what could have been added, the possibility of more lore other than "what happened here was awful" or something along those lines. The game was a pretty short playthrough, the atmosphere was suspensefull, there was very little challenge, the monster was pretty terrifying, not sure what it is but it looked creepy, the PS1 effect definitely contributed to the overall atmosphere of the game.

I'd say this game is a solid 5.5/10 for sure, a lot of improvement could be made but again, for a game made in just 2 days, this is pretty good.

Hi, thanks for the really detailed feedback. Completely agree with your thoughts on how the difficulty of the monster progresses, getting everything working took longer than planned so unfortunately I didn't have as much time as I'd have liked to put into balancing the game to make it more challenging/scary. Planning to revisit the game at some point and have a few ideas for this. Was thinking of maybe preventing running whilst using the giger counter or making it so the player needs to take medication to keep their radiation exposure down, which would force the player to slow down periodically. Also, your ideas about ammo being a bigger factor are great too. Ideally I would also like to move away from the 'slender-esque' gameplay loop too, maybe taking the game in more of a survival horror direction where the player has more elaborate objectives and more things to focus on.

Thanks again for the feedback though, very helpful stuff :)

Preventing running whilst using a giger counter is definitely a good idea, I think maybe instead of just firing shots, an aiming mechanism could be useful which would inhibit the players movement speed a bit more, basically making it so that they have to slow down, aim and shoot rather than shoot turn and run. Another thing on top of that regarding running is maybe factoring exhaustion in. This character has unlimited endurance apparently, maybe having it so that the more you sprint in x amount of time would cause for slower sprint cooldowns meaning you really have to be mindful of how you proceed when using the giger counter, shotgun and your sprinting.

The radiation is also a decent idea though I think it wouldn't make a lot of sense as why would anyone go into a place they know is radioactive considering they have a giger counter but not go in with radioactive gear. It could definitely work, maybe having deceased workers in the area with pieces to a hazmat suit that you can equip, gaining all the pieces will grant you immunity to the radiation but before that you would be susceptible to radiation poisoning which would slow you down like you said.

A cool little thing that you could choose to add aswell is the more rocks you get the slower you move, I think what isn't done alot is realism in games like this but it would add to the tension I think, having a monster chasing you while you have 6 rocks in your backpack. You've to return to your car only to find out that you dropped your keys back in the area, you've to go an retrieve them but since you pissed off the monster it becomes a lot more aggressive and vicious towards you, moves faster, takes more bullets and is the thing guarding the keys.

There's a whole lot that could be done and I definitely have some ideas cause I really like the idea behind this game and the fact that you might go back to it, in which case I would definitely play the update version 100%. What I would really like in this kind of game is a more story based approach, more locations, more monsters of varying speeds, hostility and such aswell as a few more quests to keep the player entertained. Excited to see if anything more is done with this game. I'll be sure to check up on this game from time to time to see if anything comes about!

Do you have a link to your Ludum Dare 49 submission page? Would love to rate this game :)

added it to the page :) thought I already had, should be up in the banner now

I love this kind of game, the PS 1 style make it more creepier lmao. Keep up the good work dev, can't wait for your next game !

I love the Giger Counter mechanic employed in this game. It keeps you from mindlessly walking around for hours to find what you need. The atmosphere was also very creepy. Keep it up!

Reply
CrazyCheesePuf YT12 days ago(+1)
This was a really cool game! The way the radiation monster came out of the mist was definitely the spookiest part and the surroundings were immersive! I think the radiation aspect is a really cool and unique idea for a horror game! Anyways, keep up the good work and can't wait to see what you make in the future!

I just find it funny how close someone got to our idea, turns out we weren't that original after all https://lower-third.itch.io/ld49

short but solid! good use of mechanics

I'd love to see you produce a full game

Hello, I played this game and I really liked it, the concept was interesting and this was short and sweet, good work :)

Thanks for making a video, really enjoyed watching you play :)

Pretty nice ps1 horror attempt, but ambiance is not as scary for me :p Still good

Thanks for playing and for the feedback :) I wanted to expand the gameplay a bit and make the enemy more scary/dangerous, but ran out of time.

This game was cool given what little time you had to put it together, thankfully I didn't die.

Thanks for playing and making a video, enjoyed it a lot! Watching videos like this are my favourite part of doing game jams.

Thank you for making this game, I'm glad you enjoyed it. :)

Getting a 3d game playable in 48 hours, I can imagine the amount of work that went into it. Really admire the theme and style.

Thanks for playing, was a stressful 48 hours but I'm happy with the result. Wish I had more time to expand the gameplay a bit though.

Pretty neat, however it's neither intense nor horror, if you can improve the monster and the complexity of the surroundings, it would be much better than typical slendermen games.

thanks for the feedback, this game was made singlehandedly in under 48 hours for the Ludum Dare game jam, so complexity was largely limited by time constraints. 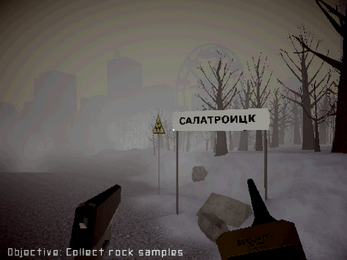 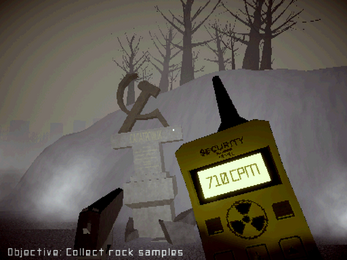 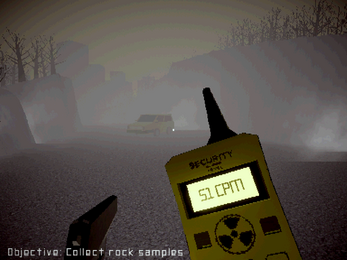 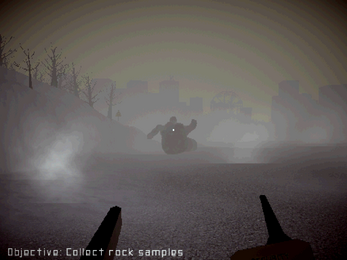